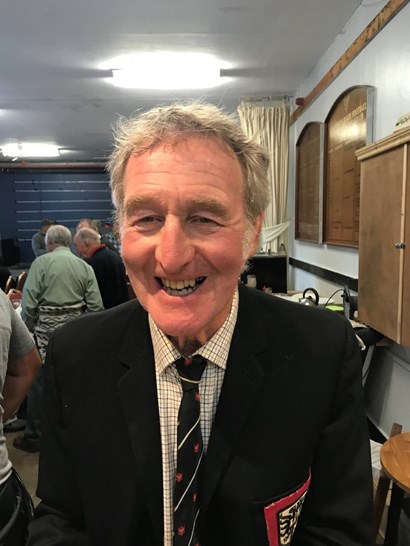 It is with a heavy heart we bring you the news that David ‘Tatty’ Muirhead very peacefully and sadly passed away at Roscarrack House, Falmouth on 24 February 2021.

A lot of our members past and present will have known Tatty and I have been asked to provide a few words in memory of him.

I first met him, not at our club, but when my family got involved in the Falmouth working boat fleet. We sailed against him as he helmed the Victory. He was a skilled helm and boatman, one of many strings to his bow! I was lucky enough to sail with him on Victory on a few occasions and got to know him more after I met my wife whose Dad (and family) were great friends with him.

I found out through my father in law that Tatty played rugby for Falmouth. Having not been around then I’m sure many others could pass a more informed comment but I understand he was a great player who captained the successful Falmouth side of the mid to late Seventies, arguably Falmouth’s greatest ever team. He also played for Cornwall during the peak of his career.

As I said earlier, he had many interests but particularly a love of the sea having been a fisherman for a large part of his life. He was so passionate about this that he represented the inshore fishing industry holding a number of positions including Chairman of Cornwall Sea Fisheries Committee, ultimately being rewarded for his work in this field with an MBE for services to fishing.

Tatty’s other greet passion was singing. He was a great singer, helping to lead the singing for working boat and gig fleets alike as well as leading the Cadgwith Singers. I understand that he, and many others at that time, would also sing after rugby games. I remember being in awe of the number of songs that he, along with my in-laws, (great singers as well from Cadgwith) could recall. You never heard the same song twice.

He also turned his hand to the legal profession holding a position in a firm in Helston, one time being instructed by my grandparents on a legal matter (nothing nefarious on their part!). What a small world it is!

A very proud Celt with a mix of Cornish and Scots who became a Cornish Bard. He will be a great loss to his family and also to a local Cornish community who held him in such high esteem.

Tatty was a true gentleman, a special friend to many and so will be very much missed by all who knew him.

Our thoughts go out to his family at this sad time.