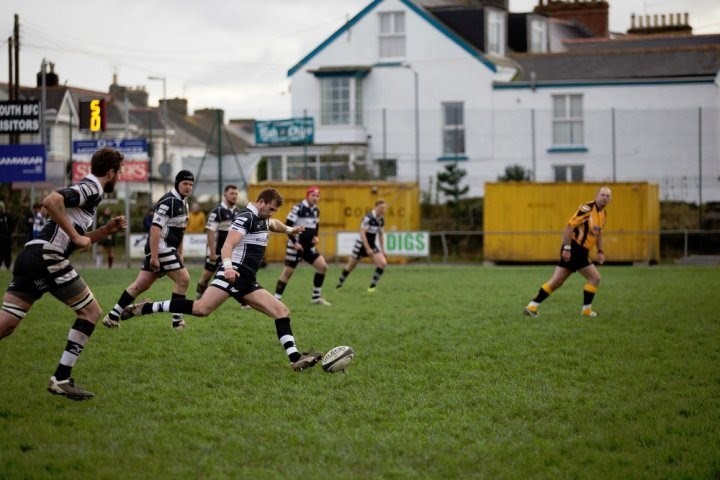 This was the acid test for Falmouth, are they the real deal this season? Admittedly, St Ives had come away from the Recreation Ground defeated but they had been over confident, this was a different story. Withycome, undefeated league leaders, with 6 wins out of 6 brought a full strength side, spearheaded by ex-England lock forward Dave Sims, to face the Eagles in a highly anticipated top of the table clash.

Needing to set out their stall early, Falmouth dominated the early exchanges, keeping possession through many phases and testing the visitors’ defence which just kept Falmouth at bay. It wasn't until the 15th minute that some defenders strayed offside and Justyn Irons, kicked the first points of the match.

Teams do not top the table without good reason, as Withycombe showed, they came straight back at Falmouth, from a line out on the 22, fly half Glenn Channing showed great strength as he broke through three tackles to open his account, converting his own try.

There followed a period where both teams battled for supremacy, The Eagles back line looked dangerous but the Withycombe scrum and forward power looked ominous but Tom David, up against Sims in the line out, was magnificent securing all his own ball and putting pressure on his illustrious opponent. Falmouth kept looking for opportunity, Nick Carne, swapping from wing to hooker following an injury, surprised the visitors with a quick tap penalty, then was fouled, Irons nailing the penalty and as a bonus Withycombe's flanker was sin binned. Half time 7-6 to Withycombe.

With conditions in their favour Withycombe must have been confident of success in the second period, influential back row Simmons was unlucky to concede a penalty for holding on after making a 20 metre break but Channing took his chance extending the visitors lead. However, this Falmouth team are high on confidence. They took the game by the scruff of the neck and two quick fire scores ensued. Firstly, Bailey and Simmons led charges forward, a kick ahead and centre David Jones was put away in the corner, for his first try for the club. Then full back Josh Symons running across the half way line spotted a gap and sprinted 50 meters under the posts, converted by Irons, 18 - 10 to Falmouth.

The Eagles looked certain to increase their lead but when with a 4 on 2 overlap Skipper Irons misjudged a pass which was intercepted by centre, Adam Morris and converted by Channing, leaving the match tantalisingly close.

Every Falmouth match seems to be a soap opera and this was no exception, the last 2 minutes were a nail biting affair, Withycombe piled on the pressure and Falmouth gave away penalties close to the try line. Desperate, Falmouth's Chris McColl was sin binned, soon joined by the visitors blind side flanker, for violent play. Then in the final seconds, after the Eagles had cleared their line, James Dobson was sent off, a penalty was awarded to Withycombe with the usually reliable Channing stepping up, he pushed the ball past the post and Falmouth had secured their well-deserved victory.